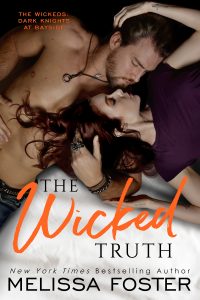 TOBIAS RIGGS THOUGHT time had passed at a snail’s pace in prison. But while those three years had felt like ten, they had nothing on the pace at which time moved in the free world after he’d lost everything he loved.

He climbed off his motorcycle, planting his leather boots on the ground as he took off his helmet and looked up at the Salty Hog. He’d stumbled upon the rustic restaurant and bar several weeks ago, when he’d first come to the nondescript town of Harwich, Massachusetts. The bar catered to people from all walks of life, making it the perfect place for a guy like him to blend in. Helmet in hand, he headed up the wooden steps to the second-story bar. When he’d gotten out of the pen, he’d thought he’d never be able to smell anything but the rancid stench of hate, anger, and oppression, which had hung in the prison air, coating his lungs and seeping beneath his skin. It had taken a while for new scents to push past his mental armor. The salty air coming off the harbor brought bittersweet memories of his youth with a family who had adored him.

And now, with the exception of his grandfather, those who were left couldn’t even look him in the eye.

He wore those memories like a shield as he walked into the crowded bar. A dozen or so guys wearing black leather vests with Dark Knights motorcycle club patches on the back eyed him skeptically, just as they’d done every other time he’d been there. At six three, pushing two hundred and thirty pounds, he stood out, but he stood out less with big guys like them around, and that suited him just fine. He kept his eyes trained on the bar as he made his way through the crowd, but a sultry voice drew his attention to the stage, where the gorgeous mahogany-haired chick who had been tossing him flirtatious looks for weeks sat on a stool playing guitar and singing. He’d seen her perform a few times. She sang stories, not songs, and she looked hot as sin in a black miniskirt and gold-and-black strappy top that bared her stomach. One black leather boot was propped on the foot ring of the stool. The other tapped the floor as she played, and a taunting smile graced the sexiest mouth he’d ever seen. Those plump lips had fucked with his head since the first time he’d walked into the bar and had seen her watching him, but it was her curious, and somehow also challenging, sky-blue eyes tracking his every step that stirred a primal desire he’d kept locked down for years.

And that was exactly where it was going to stay.

He tore his gaze away and stepped up to the bar. The hot strawberry-blond bartender, who looked to be in her late forties or early fifties, offered a warm smile, nudging her tortoiseshell glasses to the bridge of her nose. “Haven’t seen you in a few days. What can I get you, darlin’?”

Her warm demeanor was comforting, which was another reason he liked being there. She reminded him of his mother, whom he’d lost when he was thirteen and whose absence felt even more pronounced without his sister, Carrie, chattering in his ear. “Beer’s good. Whatever’s on tap. Thanks.”

As she got his drink, he watched Blue Eyes onstage. Her glossy hair hung past her shoulders, brushing the edge of her guitar, which looked too big for her petite frame. He listened a little more closely to the words she sang.

Her voice was a captivating mix of huskiness and silk, but damn, that story was dark. Could such a pretty thing feel that way, too, or was she just making shit up for entertainment purposes?

“Here you go.” The bartender set his drink down in front of him and glanced at the girl onstage with admiration. “God, she’s good.”

“Yup.” He paid for his drink and went back to listening to the story.

“When you realize you’re the source of your pain
Will you make enough adjustments to make a change?”

Blue Eyes looked directly at him as she sang, stoking the embers he was trying to snuff out. Christ, those eyes and that voice were a lethal combination. But she was singing too fast, and the next few lyrics were lost to her speed. Tobias cringed, embarrassed for her, and turned away, wondering why she was rushing through such a powerful song. As he did, she slowed down again, and her gorgeous voice sailed into his ears.

She could have been singing about his life. He gritted his teeth as she strummed the last chord, and applause rang out. A cute brunette hollered, “Go, Mads!”

Blue Eyes inhaled deeply, her shoulders lowering just a fraction as she pushed to her feet, as if she were relieved to have gotten through the story. Tobias wondered if anyone else had picked up on that, but from the cheering crowd, he doubted it. If he hadn’t been through his own hell, he might have missed it, too.

“Thanks so much,” she said to the crowd. “That was called ‘You and Your Pain.’ Who’s going to see fireworks for the Fourth this weekend?” There was another round of cheers. “Be safe. I’ll be playing at the Rusty Anchor on Tuesday night. I hope you’ll come out and see me.”

Her gaze landed on Tobias again, only this time there was no taunting smile. She looked mildly annoyed. He had a feeling those luminous eyes could see right through to a person’s soul, and that was the last thing he needed. He turned away, focusing on his beer as she announced, “Now, let’s give it up for Carnal Beat.”

Applause rang out, and a minute later she strutted over to the bar, guitar in hand.

The bartender set a glass of water down in front of her. “That was great, sweetheart.”

“Thanks. But I don’t believe he thought so,” she said pointedly.

Tobias glanced at her out of the corners of his eyes.

“That’s right. I’m talking about you.” She planted her hand on her hip. “What was that look for?”

“I don’t know what you’re talking about.”

“Did you hear that, Aunt Ginger? The broody stranger speaks.” Blue Eyes smirked. “I told you he wasn’t a caveman.”

Cute and feisty. In another life, he’d be buying her a drink. He shook his head and guzzled his beer, catching her aunt’s amused expression. No wonder Blue Eyes was there nearly every time he came in. Did she have a thing for being around family, or was Harwich that small a town?

“Come on. Spit it out,” she pushed. “I know a distasteful expression when I see it. I can take criticism. I’m a professional.”

If he’d learned one thing in his twenty-eight years, it was that when women asked for criticism, they didn’t really want to hear it. Responding usually caused an argument, and there was no winning an argument with a woman. They had a knack for dredging up everything a guy had ever said or done, as if they’d not only kept notes but were being fed information by osmosis from acquaintances and exes. Or worse, they gave the silent treatment, and after the argument was over, when they said they were cool, they usually weren’t. Women tucked away that shit like ammunition for an automatic weapon and pulled it out when you least expected it.

He finished his beer and set down his empty glass. “I got nothing to say.”

“You come in here and never talk to anyone; then you cringe when I’m onstage but refuse to tell me why. A big guy like you shouldn’t be afraid to speak his mind.” She stared him down with the confidence of a lioness sizing up her prey.

And lethal as cyanide.

Her aunt glanced over from where she was making a drink for another customer and arched a brow.

Great. He’d look like an ass if he refused again. Clearing his throat, he turned to the pushy sexpot with her too-short flouncy skirt and bare stomach, which was just begging to be touched and licked, and…Fuck. Biting back those thoughts, he gave her what she’d asked for. “That was a powerful story. Slow it down and your words will have a bigger impact.”

Her eyes widened, then instantly narrowed as another sexy smirk slid into place. “I think I know how to tell a story. I’ve been doing this for years.” The humor bled from her voice. “Nobody else thought it was too fast. Didn’t you hear the applause? What do you know about music? You sure don’t look like Simon Cowell to me.”

This chick was a triple threat, as tough as she was cute and feisty, which spelled his favorite kind of trouble. Trouble he couldn’t afford to get mixed up with.

“Sorry I said anything. It won’t happen again.” He pushed to his feet and pulled a twenty from his pocket, nodding to Ginger as he put the money on the bar. “Her next drink is on me.”

“Sounds like somebody struck a nerve.” Ginger winked at him and went to help another customer as two dark-haired bikers strode up to Blue Eyes, openly sizing up Tobias.

“What’s going on?” the taller of the two asked, setting a serious stare on him.

“He giving you trouble, Mads?” the heavily tatted one asked, puffing out his chest as two more guys in black leather vests with enough ink on their skin to fill a novel strode over with icy stares.

Tobias readied for a fight, muscles flexing, feet shifting, mentally choreographing how it would play out. He was no stranger to unfair fights, no matter how he tried to avoid them. He’d take a few hits, but he’d pummel them in the process, taking at least two down with him. Memories impaled him—the crack of bones against his knuckles, the thud of his best friend landing on the floor, and the agonizing hell that had followed. Clenching his jaw tighter, he unfurled his fists. He was not doing this. Not tonight. Not ever again.

Tobias held his hands up. “Nah, man. I was just leaving.” He reached for his helmet and turned to leave, but the two latecomers blocked his way.

“Mads? What’d he do?” the tallest one seethed.

She rolled her eyes. “I don’t need your protection, Blaine. He didn’t do anything. He just didn’t like my performance.”

“No shit?” another asked, eyeing Tobias. “Why not? Mads is a killer storyteller, and she’s my songwriting partner, so if you got a beef with her, you’re gonna have to deal with me.”

“Just let it go, Zander.” She pushed past them, stalking toward the table where the cute brunette who had cheered her on was sitting.

“Stay away from our sister, or we’re going to have trouble,” the guy she’d called Blaine ordered, and motioned for the other guys to step aside.

“Boys,” Ginger warned. “Leave that man alone. He didn’t do anything wrong.”

Tobias appreciated her support, but Blaine was right. That blue-eyed firecracker was exactly the kind of trouble he’d like to get into, which was why he headed for the door.