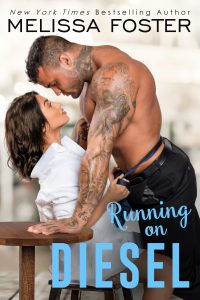 THE MURMURS OF the crowd at Whiskey Bro’s competed with the sounds of billiards and the cold thunder of Desmond “Diesel” Black’s mounting anger as he poured a round of shots for a customer, eyes locked on Tracey Kline. The hot little waitress was getting eye-fucked by a denim-jacket-wearing, spike-haired punk who had just strolled into the bar with two other guys. Tracey, being the sweet thing she was, batted her big hazel eyes, and with a flick of her pointy chin, sent her shoulder-length silky dark hair out of her face as she motioned toward a table. Her hair tumbled back down over one eye, which only made her sexier. The denim-jacket-wearing asshole must have seen it as an invitation, because while his buddies headed for the table, he headed for Tracey. Diesel gritted his teeth.

“Watch it, dude,” Jed Moon, the other bartender, warned.

Diesel snapped around, glowering at him.

Amused, Moon nodded to the tequila Diesel was still pouring, which was flowing like a river off the edge of the bar, puddling by his black leather boots.

“Did you just growl at me? You’re losing it, man.” He tossed Diesel a towel.

“Fuck.” Diesel’s eyes shot back to the asshole talking with Tracey as he mopped up the bar.

Tracey looked over, catching Diesel watching them. Her eyes narrowed, and the dickbag’s gaze followed hers to Diesel.

The asshole’s face blanched, but as if he’d caught himself, an arrogant grin appeared, and he said something else to Tracey, then sauntered over to his friends. Tracey glared at Diesel, spun on her heels, and stormed over to another customer.

Moon sidled up to him. “I’m beginning to think you’ve either been here too long or you need to make that girl yours.”

Diesel’s eyes remained trained on Tracey. He wasn’t about to make any woman his. He’d been a lone wolf since he was nineteen years old, when his mother lost a long, hard battle with cancer, and he’d left the only home he’d ever known in Hope Ridge, Colorado. At thirty-two, the only ties he had or wanted were to the brotherhood of the Dark Knights motorcycle club, of which he was a Nomad member—loyal to the club without claiming any chapter as his own. But Moon had a point about him being there too long. Diesel was a bounty hunter, and he didn’t usually stay anywhere more than a few weeks before he got the itch to climb on his motorcycle and take off to another town or state. But he’d stuck around as a favor to the president of the motorcycle club’s old lady, Red Whiskey. Her oldest son, Bullet, had run the bar for years, but now that he and his wife had a baby girl, he wanted more family time. Diesel had stepped in and taken over in the evenings.

Then there was the second favor Red had asked of him. The favor regarding Tracey, who had escaped an abusive relationship and had been a scared, broken bird without a nest—She’s a special girl, and I need you to watch over her. Keep her safe. The favor, and the girl, had kept him there for nearly two years.

“I’d say fuck her out of your system,” Moon said, jarring Diesel from his thoughts. “But Tracey’s not like that. She’s the kind of girl you settle down with.”

No shit. Diesel dropped the towel and stepped on it to mop the liquor off the floor. “I’d split that pretty little thing in half.”

Tracey might have come into her own these last two years and gone from a broken bird to a wise owl, but at six foot six and two hundred and fifty pounds of solid muscle, with a cock worthy of a hundred women kneeling at his feet, Diesel spoke the truth. Tracey was only a hair over five feet tall, and couldn’t weigh more than a buck ten soaking wet. Not to mention that she was too damn sweet for the likes of him. But even that didn’t keep thoughts of having her tight little body wrapped around him at bay. He didn’t know how it had gotten to that point when he’d initially only been all about protecting her, but hell if she didn’t send lust scorching through his veins.

That was the primary reason he was planning on getting the hell out of Peaceful Harbor for good soon. Usually, when the urge hit, he climbed on his bike and took off without giving anyone a heads-up, much less notice. But he couldn’t do that to the Whiskeys. They relied on him, and he owed them time to find a replacement. He’d tell Red tomorrow that he was taking off after the holidays, which should give them time to find someone.

Tracey stalked toward the bar, shooting invisible daggers at Diesel.

This from the girl who hadn’t been able to look him in the eyes for the first few months she’d worked there. She’d come a long way from the scared girl who lived in oversized flannel shirts and baggy jeans. His gaze dropped to the sliver of skin between the hem of the Whiskey Bro’s T-shirt clinging to her perky breasts and her curve-hugging jeans. He imagined her spread out on the bar as he tasted that sliver of pale flesh on his way to the feast between her legs.

Tracey smacked her hand on the bar, snapping him from the fantasy he had no business entertaining. “Stop scaring off my tips.”

“Pull your shirt down before you get yourself in trouble.” The place was busy. She had plenty of tips coming in. She didn’t need to advertise what she wasn’t putting out.

She smirked, maintaining a challenging stare as she leaned over the bar, giving him an eyeful of cleavage and revealing a hint of black lace. “I think you have me confused with your biker hos. Just because they call you Daddy doesn’t mean you can act like my father.”

“Daddy,” my ass. He wasn’t into that shit. He leaned his forearms on the bar, bringing him nose to nose with Tracey, her enticingly feminine scent stoking the flames he was trying to ignore. He held her gaze, enjoying the quickening of her breaths, the nervous flutter of her long lashes as she visibly tried to regain her courage. He got a kick out of her newfound bravado, but she was liable to get herself in trouble acting like that.

“Getting a little mouthy, sparky,” he warned. “Better check that.”

She pressed her lips into a firm line and pushed from the bar, nervously looking at the customers climbing onto the barstools beside her. “I need a pitcher of Bud and three glasses.”

He scanned the room as he filled the order, nervous energy jumping off Tracey like fleas. Diesel caught the asshole in the denim jacket checking her out and shut him down with another threatening stare as Tracey reached across the bar for the glasses. Diesel covered her slim wrist with his hand, his fingers covering her entire forearm. She was so small, it made him sick to think a man had ever raised a hand to her.

“What?” she snapped, fire igniting in her eyes.

THE GALL OF this beast trying to tell me what to wear and how to act. There was a time when Tracey would have cowered under the controlling touch or warning glare of a man, especially one the size of a mountain who grunted more than he spoke. But she was no longer the weak, friendless girl she’d been when she’d escaped the wrath of her asshole boyfriend, Dennis Smoot, and she’d come too far to let anyone tell her what she could or couldn’t do.