Maybe We Should – Sneak Peek 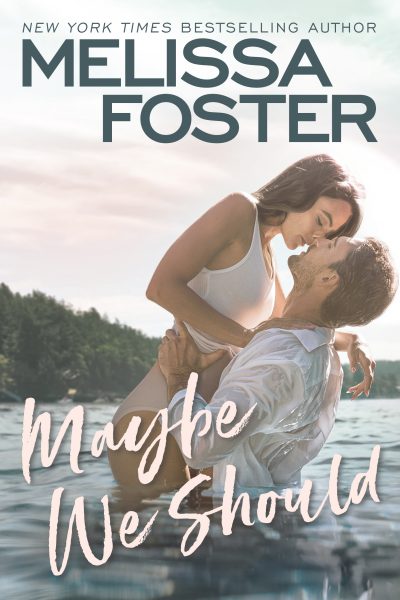 **This book is published by Montlake Romance (an Amazon imprint) and won’t be available on other ebook retailers, but you can download a FREE Kindle ereader app to read it (link below) or order the paperback.
Free Kindle eReader app ➜ http://bit.ly/FreeKindleApp1

The warm summer sun beat down on Cait Weatherby’s shoulders as she came to Brighton Marsh at the end of her three-mile hike through the wildlife refuge on Silver Island. She dropped her backpack in the sand and gazed past the marshy inlet to the ocean in the distance, remembering when she was a little girl and had dreamed of walking into the sea and becoming a mermaid. She’d imagined basking in the freedom of the water and reveling in the beauty of the changing tides. She couldn’t even swim, but she’d always felt a kinship with the sea, coming and going under the cover of night, guided by the light of the moon. It had been a long time since she’d needed that camouflage, but the ghosts of her past still hovered, ever-present reminders of how quickly things could change.

Those ghosts were a burden she was sick of carrying, but short of having her memory erased, she had no idea how to get out from under them. She planted her hands on her hips and focused on the beauty before her instead of getting lost in the past. Long lush grasses sprouted through the surface of the murky water like thick patches of spiky hair swishing in the late-afternoon breeze. The pungent aroma of sulfur hung in the air. It was a natural deterrent to most hikers, and since Cait treasured her privacy, this spot had quickly become one of her favorites.

She’d discovered the refuge when she’d overheard a customer talking about it at the beachfront restaurant she’d inherited a little more than three months ago from the birth mother she’d never known, Ava de Messiéres. Cait’s life had been forever changed when she’d been summoned to the island by Shelley Steele, one of Ava’s closest friends, to go over the details of Ava’s will. In the span of one afternoon, Cait had discovered the identity of her birth mother, inherited one-third of the Bistro and one-third of Ava’s cottage, and learned that she had two half sisters—Deirdra, a strong-willed, stressed-out attorney who lived in Boston, and Abby, a sweet, free-spirited chef who had returned to the island from New York for a fresh start. Abby had since fallen madly in love and gotten engaged to Aiden Aldridge, one of the nicest guys Cait had ever met. Abby had welcomed Cait into her life without hesitation, and together with Aiden, they’d revitalized the Bistro, while Deirdra had been less trusting of her at first. Cait knew all about distrust. Hell, she was the queen of it. But as she had learned to trust her newfound sisters, Deirdra had learned to trust her, and they’d become close, texting often to keep in touch.

Most days Cait still had a hard time wrapping her head around the impact of the last few months. She’d gone from wondering where she’d come from to having a blood-related family, a new group of friends, and a new life that she was trying to fit into her old one—the life she loved on Cape Cod, where she worked at Wicked Ink as a tattooist and body piercer. The owner, Tank Wicked, was the closest thing she’d ever had to a best friend. She loved the broody biker and his family. Now she traveled between Silver Island and the Cape, working at the Bistro and at Wicked Ink. As much as she loved the people and the jobs at both locations, traveling back and forth was exhausting. She knew she needed to figure out her future before she wore herself down, but how could she choose when one life offered the safety she’d come to count on and the other held the promise of a new beginning with her real family?

She knelt in the warm sand and opened her backpack, withdrawing one of her many sketchbooks and a water bottle. She sat down with the pad in her lap and took a drink, thinking about how blessed she was to have two families. Well, technically she had three, since she’d been adopted as a baby. Her adoptive mother had died when she was four, but her snake of an adoptive father was still alive and well in Connecticut. Not that she ever wanted to see him again.

As she’d done forever, she buried thoughts of the two-faced man who had raised her and opened her sketchbook, refusing to let memories of him ruin her afternoon. Her chest squeezed at the sight of the unopened letter Ava had left for her. Abby and Deirdra had also been given letters. Abby had read hers, and it had helped her move on with her life, but Deirdra had so much pent-up resentment for their alcoholic mother, Cait had doubts she’d ever read it.

She ran her fingers over Ava’s loopy handwriting on the front of the envelope, feeling a sense of peace and apprehension. She’d always wondered if she’d been unwanted and forgotten. Now she knew neither was the case. Only seventeen at the time of Cait’s birth, Ava had been forced by her overbearing parents to give her up. She’d turned to alcohol to numb her pain and had run away, eventually coming to Silver Island for a fresh start, where she’d met Olivier, the Frenchman who had owned the Bistro. He’d helped her get sober, and they’d married a year later. Soon after, they’d tracked down Cait’s adoptive parents. After Ava’s death, Cait and her sisters found letters and pictures of Cait that her adoptive mother had sent to Ava every month like clockwork. The letters—and life as Cait had known it—had stopped when Cait was four and her adoptive mother had passed away.

She’d never forget the flood of emotions she’d felt when Shelley handed her the letter, but she still couldn’t bring herself to read it. She wanted to read it and had imagined all the lovely things Ava might have written. But if she’d learned one thing from her difficult upbringing, it was that there was always another shoe waiting to drop, as if they were as plentiful as rain. She wanted to pretend her life was beautiful for just a little while longer before diving into whatever her birth mother had wanted to get off her chest, just in case.

She went back to flipping the pages of her sketchbook, and her pulse quickened at a sketch of Brant Remington. Too hot and charming for his own good, the dimple-cheeked, flirtatious man had been hitting on her since the day they’d met, when she’d first come to the island. He made her feel things she’d never felt before, like the butterflies currently taking flight in her stomach at the mere thought of him. She quickly turned the pages to shut those buggers down, stopping on a drawing she’d been working on of Aiden proposing to Abby the day she and Cait had won the Best of the Island Restaurant Competition. He’d proposed in front of everyone at the award ceremony, like he couldn’t hold back a second longer. Cait couldn’t imagine being loved that much. Abby and Aiden were getting married in the fall, and she planned to give them the picture as a wedding present.

As she began working on the sketch of Abby, wide-eyed and teary, and Aiden down on one knee, looking at her like she was all he ever wanted, Cait filled with longing to be as openhearted as they were. She was anything but open, especially toward men.

A high-pitched yelp cut through the silence, bringing Cait to her feet. She brushed the sand from the backs of her legs, trying to figure out where the noise had come from. Splashing sounds and strangled cries sent chills down her spine. She hurried to the water’s edge as more cries rang out, and her eyes caught on ripples coming from the right. She ran along the shore, searching the water with her heart in her throat, and spotted an animal’s tiny snout poking through the surface. It yelped again and went under the water. Oh no! What was that? A cat? She couldn’t let it drown.

Scrambling to untie her boots as fast as she could, she looked around to be sure she was alone and pulled off her top and shorts. She hurried into the water, her feet sinking into the muck at the bottom. When the water hit her waist, she held her arms out to her sides, telling herself she was fine, fine, fine. The cold, murky water inched up her stomach, and the animal’s head bobbed a few yards away, its tiny yelps tearing at her. Her next step met emptiness, and she sank, screaming as she went under and was swallowed by darkness. She fought her way back up toward the surface and gasped for air. Arms flailing, legs kicking, she lunged for the animal—and missed—sinking beneath the surface again. She’d only just found her sisters, and now she was going to drown in the marsh, and nobody would ever find her or the animal she was trying to save! She hadn’t survived the horror of her father just to die in this muck. She fought her way up to the surface and grabbed the tiny beast with one hand, holding its frail body up above her head as she sank again despite her frantic efforts, taking the animal down with her.

She clutched the animal to her chest, holding her breath, one arm grasping for the surface, legs kicking frantically. Something thick and strong circled her waist, hauling her back against something hard. She fought to free herself, clutching the animal she was trying to save. Were there man-eating octopuses or maniacal anacondas on Silver Island? Oh God! Suddenly she was thrust to the surface, and she gasped a breath just as her foot connected with whatever held her, and a deep male voice shouted, “Cait! It’s me!”

Clutching the tiny animal, she looked over her shoulder, catching a glimpse of electric-blue eyes as she sank beneath the surface again…

To continue reading, please buy MAYBE WE SHOULD

**This book is published by Montlake Romance (an Amazon imprint) and won’t be available on other ebook retailers, but you can download a FREE Kindle ereader app to read it (link below) or order the paperback.
Free Kindle eReader app ➜ http://bit.ly/FreeKindleApp1

RETURN TO MAYBE WE SHOULD DETAIL PAGE