1. What would you have done if faced with Megan's decision?
Such a difficult question! I am not sure if I would be strong enough to make the same decision that Megan made. I would like to think so, but I am a bit of

a chicken when it comes to certain things, and saying goodbye to my children falls into that area.
2.  The sub-plot of Holly's decision threw me in for a loop – what was your motivation behind it?
My motivation in writing the sub-plot about Holly was that friendship takes many different paths, and true friendship is defined by selflessness, forgiveness, and acceptance. I wanted readers to think about their own lives, perhaps be a little less judgmental and recognize that the basis of all decisions is not always visible. I put Holly in the most uncomfortable position that I could fathom–one that would test every facet of her friendship with Megan–in order to bring my readers outside their own comfort zones and into a position of looking at the situation as a much broader scenario.
3.  What was the inspiration behind the birthday tutorial?
The ritual has become a real topic of conversation, and I did not expect it to be such a source of interest, although I'm glad that it is. Megan and her friends have found a way that bonds them together, and gives them peace each year. The ritual was purposefully not written in the sense of a religious ritual, and it's a shame that some try to make it fit into one religion or another, or fault the ritual for not following a certain religious path. The ritual is a coming together of spirit for the group, and they do what feels right to them. The inspiration was simply that this group of friends was not afraid to step outside the typical boundaries of society. They carried on a ritual from their early 20's because it meant something to them. It centered them. Who knows, it might incite a desire to have such a ritual for the readers.
4.  What is your view of the afterlife?
I think my view and Megan's view are very much inline. If one is open to feeling the presence of loved ones who have passed on, there are endless possibilities.
5. Was Megan's decision something you struggled with as an author, or was it a natural development of the character?
This story stemmed from a decision my mother had made in her own life, and I had stewed about that for many years before writing the story. My struggling came before the writing process.

Probably the easiest part was writing from Olivia's perspective. It's crazy how easy it is for me to climb back into the head of a rebellious teenager. The most difficult part was writing the part where Olivia found out her mother was dying. That was heart-wrenching.

7. Will we see Olivia again in one of your books? I'd love to see how she grows up.
I'm so glad you asked! Many readers have asked about my writing a follow-up novel. At first I didn't think I would, but lately, Olivia has been present in my mind, so yes, there is a good chance that there will be a second novel that will provide a view into Olivia and Holly's lives.
8. Do you think Megan's connection will be broken after the goodbye ceremony?
Only time will tell.
Thank you Melissa for taking the time to answer these questions! 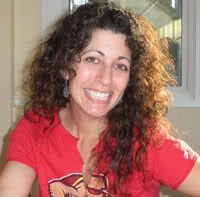 If you want to know more about Melissa Foster's writing, you can follow her on Twitter, like her onFacebook, or read her blog.  Melissa Foster is the award-winning author of two novels, Megan’s Way and Chasing Amanda. She is the founder of the Women’s Nest, a social and support community for women, and WoMen’s Literary Café, a literary community. Melissa is currently collaborating in the film production of Megan’s Way. Melissa has written for Calgary’s Child Magazine, and Women Business Owners Magazine. She hosts an annual Aspiring Authors contest for children, and has painted and donated several murals to The Hospital for Sick Children in Washington, DC. Melissa is currently working on her next novel, and lives in Maryland with her family. Melissa's interests include her family, reading, writing, painting, friends, helping women see the positive side of life, and visiting Cape Cod. Melissa enjoys discussing her books with book clubs and reader groups, and welcomes an invitation to your event.