Book Club Queen interviews Melissa Foster, COME BACK TO ME 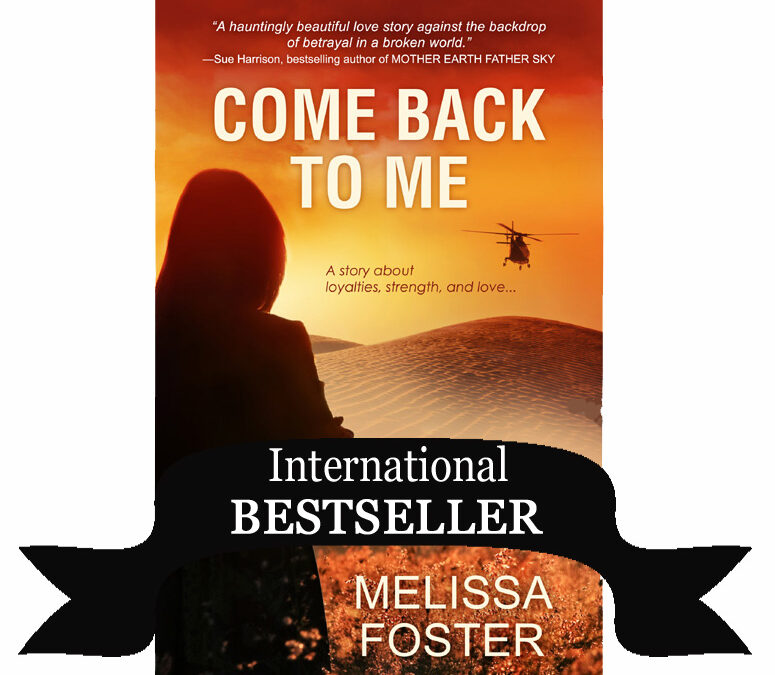 Come Back to Me interview with Melissa Fosterwith Book Club Queen, Desiree

I have now read all three of your books, Megan's Way,Chasing Amanda, and Come Back to Me. Each is VERY different in subject matter. Where do your ideas come from and how are you able to write such incredibly different characters and stories?

Hi Desiree, thank you for having me back on your site. I love it here!

I am definitely a genre hopper, and I like it that way. My ideas come to me from life in general–my deepest fears, events that happen to me and/or others that I know. Megan's Way stemmed from an event that happened with my mother twenty year ago, making it very easy for me to climb into both Megan, and her daughter Olivia's, skin. I come up with many of my ideas while I'm exercising. Both Chasing Amanda and Come Back to Me began with ideas that formed while I was running.

Every mother's nightmare–the abduction of a child, combined with the scary, secluded road that I ran along (until the day I came up with the storyline), brought me to the storyline in Chasing Amanda, and the summer before my husband was to leave for a tour in Iraq, combined with an early morning jog, brought Come Back to Me to life.

I will say, up front, that Come Back to Me is a shocking story with a stunning end. Are you aware of the controversial feelings you are going to stir up in readers when they are through? Did you plan it that way or did the story reveal itself to you as you wrote?

I was just as surprised by the ending of Come Back to Me as my readers are.

I don't want to reveal any spoilers, but the ending that I had anticipated was far from the ending that I wrote. When I came to the fork in the story, there was a pull in the direction that I wrote, and I followed it. I don't think any of my books are simple, easy reads. I strive to give the reader more than just an escape. I hope to spark instrospection, and incite thoughts that last long after the last word on the page is written.

Tess's fascination with coasters struck a chord with me. I spent a good portion of the novel trying to figure out exactly why she "needed" them in her life. I felt like the surface explanation of "it helped her through a traumatic childhood" wasn't good enough. Can you give us more insight into this habit of hers? Also, she seemed to have begun conquering it towards the end. Was it a good thing or a bad thing that she was starting to give up this habit?

Tess's need to control her surroundings compelled her obsession with coasters.

She grew up in a chaotic household and she needed to have some modicum of safety–something she could control. When I first wrote the book, there was a full description of each stage of her compulsion, from the time she was five until she was an adult, and insight into how she adapted to her grandmother's compulsion for coasters. Much of that was omitted during the editing process, leaving what I believed to be enough for the reader to understand the basis of her obsession without weighing down the story.

It doesn't take much for a person to feel in control–efficient and unchangeable schedules, eating disorders, washing hands–they're a few of the ways that people living in dysfunctional environments gain a feeling of control. For Tess, it was coasters.

Is Beau's escape story a common one? Or do more people fail when trying to flee a war-ravaged country?

I would think that Beau's story is very unique. That's the beauty of fiction–it can be whatever we can imagine.

The secondary characters — Alice, Kevin, and Louie — seem to have so much more to their stories! Is there any chance any of these characters will have a book of their own some day?

That's a great question. I'm not sure if they will or not. Alice really surprised me. I loved finding her vulnerable side. I've been asked about a follow-up book to Megan's Way for years, and until this year, I'd always opted not to write Olivia's story. This year, I've begun to feel her story. It might one day be written. One never knows when a character will reappear.

I posted to you on FB while I was reading that you really know how to write a heart-wrenching story. What has the response been to this tragic tale?

Come Back to Me has received many strong reviews, and I certainly have received a lot of positive praise from readers. I've also received a few emails wishing for a different ending, although, interestingly enough, they also noted that while they were angry about the ending, they validated that the ending really worked for the story. You CAâ€™t please all readers with all books. I believe books are like ice cream, and thankfully, just as there are over 50 flavors of ice cream, there are many different stories for readers to enjoy.

Can you tell us anything about your current writing projects?

Sure. I'm currently working on a psychological thriller.

Thirty-Six Hours — Kara Knight has just thirty-six hours to find her way out of her obsessive captor'sÂ delusionalÂ world. Mistaken for Roland Greer's long-lost fraternal twin, Kara struggles to make sense in the darkness that envelops her, and plan her escape, as the hours tick away and Roland Greer plays out his plan. In thirty six hours, at the exact moment of their birth, he will take them both into death–never to be separated again. Thirty-Six Hours is a psychological thriller that will make you question your every memory.

Thank you, Desiree. I always enjoy chatting with you about all things literary. I hope you and your readers will stop by WoMen's Literary cage and check out our new releases December 1-7. We have many awesome winter events for readers. www.womenslitcafe.com