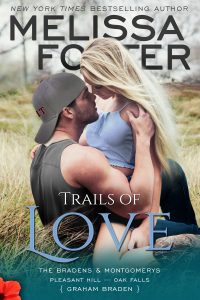 MUSIC BLARED FROM the enormous amphitheater at the far end of the festival grounds. Musicians had been playing all afternoon despite the rain and wind pummeling the small town—and Morgyn Montgomery’s makeshift tent. The summer music festival was one of her favorite overnight events, and it was only about an hour away from her hometown of Oak Falls, Virginia. With five sisters and one brother, there was usually someone willing to camp out with her. But her oldest sister, Grace, was getting married in two days and couldn’t see past veils and flowers, and her sister Sable and their younger brother, Axsel, both played in bands that were being featured at the event and would be hanging out with their bandmates. Two of her other sisters hated loud music, so that left her with Brindle, the sister with whom she was closest. Brindle was always up for fun. Unfortunately, she was also about as reliable as a flame in the wind, and at the moment her ass was hanging out of her Daisy Dukes as she collected her things to leave.

“I cannot believe you’re ditching me for Trace. Again.”

Brindle tossed her wet blond hair over her shoulder and set her hand on her hip with an amused expression. “We’re in Romance, Virginia, Morg. Don’t you think I deserve a little romance?”

“Oh, so now Trace is romancing you?” Morgyn laughed. “You might want to grab a shovel on your way out to clear a path through all that bullshit.”

Brindle looked across the sea of tents littering the muddy field at her tall, dark, and arrogant on-again off-again boyfriend for the last bazillion years and sighed. “I know, but look at him. That cowboy is a walking orgasm, and after delaying my trip to Paris, I think I’m due many rounds of earth-shattering sex.”

Brindle was supposed to leave for Paris two weeks ago for a well-deserved vacation, but Grace and her fiancé, Reed, had postponed their wedding because Axsel’s schedule had gotten messed up. “Then say that, Brin. Don’t give me some crap about romance when we both know you and Trace will never find your way past hot sex to something more meaningful. You’re worth so much more than being Trace’s fuck buddy.”

A wave of emotions passed over Brindle’s face too quickly for Morgyn to read, but just as quickly, a smirk settled in. “He’s my fuck buddy, and trust me, a man like Trace Jericho doesn’t need romance…”

She hoisted her backpack over her shoulders as their sister Sable’s band, Surge, took the stage, blasting one of Brindle and Morgyn’s favorite songs. Brindle took Morgyn’s hand and ran out of the tent. The sky opened, and they turned their faces and palms up, catching the rain in their mouths as they danced. They spun and shimmied, splashing in the puddles and laughing like fools. Morgyn was going to miss the heck out of Brindle when she was away.

“You know you love me!” Brindle yelled as the sudden shower turned to spitting rain.

A deep, infectious laugh drew Morgyn’s attention. She quickly found the source of it—a shirtless guy strutting across the field with his arm around a long-haired guy. An MIT baseball cap shaded the shirtless guy’s dark eyes, and his big, plucky smile did something wicked to her insides. He turned that gorgeous smile on the guy he was walking with and winked. Okay, so maybe he was gay, but sweet baby Jesus, who cared? She was allowed to look. It wasn’t like she could turn away if she’d wanted to. Her heart thudded hard and fast as she greedily drank in his athletic body. Planes of toned and tanned flesh and a treasure trail that disappeared beneath wet denim, clinging to thick thighs. Oh, how she loved thick-legged men! An army-green duffel was slung crosswise over his broad chest, and he had leather and beaded bracelets around one wrist. Morgyn had a thing for men who wore jewelry, confident men who were comfortable in their own skin.

“Hey! Who are you—” Brindle followed her gaze. “Holy smokes, look at those arms.”

“Look at his legs.” She grabbed Brindle’s arm and said, “And that smile…”

Hot MIT Guy turned, and for the briefest of seconds their eyes caught with the impact of metal to magnet. He lifted his brows, and that toe-curling smile widened, lighting up the gray afternoon and causing a flurry of flutters in Morgyn’s stomach.

“Wow. Look at you all weak-kneed over a stranger,” Brindle said as the crowd swallowed him and Morgyn lost sight of him.

“A possibly gay stranger,” she mumbled as Trace sauntered over.

Mischief glimmered in her sister’s eyes as she whispered, “You could always watch.”

Brindle threw her arms around Trace’s neck and kissed him.

She absently touched the umbrella hat she’d bought off some girl earlier. No wonder Hot MIT Guy had been laughing. Hot guys didn’t wear umbrella hats. They were too cool for that. She kind of hated cool. She had the worst luck with guys. Brindle might not have forever with Trace, but at least she’d found a guy who liked her and accepted her for who she was. Their mother always said Morgyn needed a real man. A man who’s not jealous, doesn’t need neat, organized, or conventional, and appreciates your beautiful free spirit. Morgyn was pretty sure that man didn’t exist.

“Hi, Trace. I thought you weren’t coming,” Morgyn said as he crushed Brindle against him.

“JJ and Beckett dragged me against my will,” Trace said.

Morgyn and Brindle had grown up with JJ, one of Trace’s brothers, and Beckett Wheeler. Morgyn and Beckett had dated for a while, but they made better friends than significant others.

“Then I saw your sister’s fine ass hanging out of those Daisy Dukes, and…” Trace pressed his lips to Brindle’s. “She made it all worthwhile.”

Brindle gazed longingly up at him.

Her sister was kidding herself if she thought she didn’t want more than sex with the cocky cowboy. But Morgyn knew better than to say that. Her sister would deny it until the cows came home. Brindle liked to do what she wanted, with whomever she wanted, and if anyone tried to tell her otherwise, she’d rebel out of the sheer need to prove everyone wrong. She and Sable had that in common, whereas Morgyn might do things her own way, but not out of rebellion. She did what made her happy, which had the odd effect of usually pissing guys off.

“I’ll see you back home tomorrow.” Brindle looked over her shoulder as they walked away and yelled, “Try to find some romance! Or at least a good f—”

Trace smothered her words with another kiss, and they stumbled off, smooching like new lovers, when they’d been all over each other for a decade. Their kisses went on and on, and a streak of jealousy zipped through Morgyn. Hot no-strings-attached sex wasn’t something Morgyn had ever sought out, but it wasn’t looking too bad right now.

She dipped under the canopy and grabbed a beer from her cooler, and then she made her way toward the stage to find her friends. She took the long way, hoping to catch sight of the hot gay guy again, because they didn’t make guys like him in her small town. She weaved through masses of poncho-wearing festivalgoers, looking for a gray baseball cap.

She spun around, catching sight of Gavin Wheeler, Beckett’s brother. Last she’d heard, he’d left the big design firm he’d worked for in Boston and had moved to Cape Cod to partner in a smaller company. He was dirty dancing with a blonde she didn’t recognize, though he sure looked like he knew her intimately. Or was about to.

“Well, I’m here.” He tugged the blonde against him with a dark look in his eyes and said, “And I hope to be coming later.”

Was everyone going to have sex tonight except her? Morgyn continued making her way through the crowd, dodging dancing bodies and skirting tents and puddles. Her boots were full of rainwater, sloshing with every step. She hadn’t checked the weather before leaving for the festival. Luckily, she had a pair of gently used bright red rain boots she’d embellished with colorful jewels and silver bangles and bells to sell in her eclectic clothing store. They were two sizes too big, but they were better than the sandals she’d worn, even if her feet were currently swimming in an ocean of water.

She squeezed between a painfully skinny woman and two heavyset guys, stopped to pet a curly haired black puppy who got muddy paw prints all over her while giving her sloppy kisses, and joined a group of people dancing to country songs, before making her way to a storage container that backed up to a fence. She set her beer on the top and hoisted herself up to empty the water from her boots. She plopped down on her butt, watching her sister strut across the stage. Even trapped by her ever-present cowgirl hat, Sable’s dark hair billowed wild and thick over her shoulders as she played her guitar and belted out the lyrics. Morgyn swayed to the beat as people traipsed by. She tugged off one boot, then dumped the water over the fence behind her.

Morgyn scrambled up on her knees and peered over the fence, meeting the angry, and insanely sexy, eyes of Hot MIT Guy, standing with his pants unbuttoned and his cock in his hand. “Oh gosh! I’m so sorry!” She tried to look away, but her eyes were glued to him—or rather, to his eye-poppingly thick male body part.

“Sunshine…” He laughed, but it wasn’t the loud, infectious laughter that had first caught her attention. This laugh was a low rumble that made her insides grow hot.

“Um…” Look away. God, look away already. Sunshine? She forced her eyes up to his, and he arched a brow, amusement replacing his initial annoyance. “I’m sorry! I didn’t mean to…”

“I can hold it out as long as you’d like, blondie.”

Her jaw dropped, which earned the infectious laughter she remembered. His long-haired boyfriend, who was also quite stunning, appeared out of nowhere, giving the other guy a curious glance.

“I’m sorry!” she said to the long-haired dude as Hot MIT Guy tucked himself back into his jeans. “I just dumped water all over your boyfriend.”

Silence fell between them, and then they both burst into hysterics.

“I’m not sure how that explains his massive cock in his hand,” the long-haired guy said as he draped an arm around Hot MIT Guy, pulling him closer and waggling his brows. “But damn, dude. Now I’m going to have to get you out of those wet pants, aren’t I?”

“Lucky” slipped out before she could stop it. She slapped her hand over her mouth and spun around, scrambling to tug on her boot. She tried not to listen to the muffled whispers but was unable to help herself. From behind…hard…wet…Brace your foot here.

Festival sex was everywhere, but she did not want to listen to those two hot guys going at it! She stilled. Or maybe…

No! Geez! Brindle must be getting to me.

She dumped the water from her other boot beside the storage container and heard a grunt. The fence shook, and her pulse sprinted. She slammed her eyes shut, as if it would block out the noise, and tugged on her boot. In the next second Hot MIT Guy was scaling the fence. She snagged her beer as he plopped down beside her—God, he is gorgeous. And fast. His boyfriend landed with a thud on her other side.