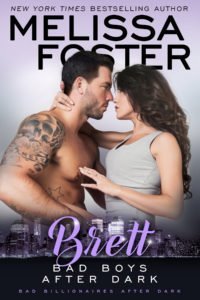 BRETT BAD HATED to be subdued, in bed or in social situations, and he’d just about hit his limit. But he cherished his family, which explained why he was standing in the middle of a Manhattan perfumery at nine thirty on a Friday night, celebrating the grand opening of Cashmere, his sister-in-law’s new boutique, instead of seeking relief in the arms of a beautiful woman. He was happy for her, but as he downed a second glass of champagne, he itched to get the hell out of the refined event.

His brother Dylan sidled up to him, his eyes locked on his wife, Tiffany, standing across the room. There was a time when Dylan would be eyeing the skirts in the room, playing wingman for Brett. But like Carson and their oldest brother, Mick, Dylan had recently fallen in love, leaving Brett as the last bachelor.

A position he planned to hold on to for a very long time.

Brett might look like his brothers—tall, dark, and athletic—but that was about as far as their similarities went. He couldn’t imagine coming home to the same woman every night. Hell, he couldn’t imagine kissing the same woman every night. Although, he had to admit, after spending time with his brothers and their wives, who were so swept up in each other they practically oozed love, he could no longer stomach the meaningless talk he’d once endured when he hooked up with random women. His brothers were so happy, Brett sometimes wondered if he was missing out on some magnificent world he hadn’t been clued into. But that thought was usually followed by a laugh, a drink, and a fuck.

At least it had been, until a couple months ago.

He picked up another flute of champagne, and as he brought it to his lips, he noticed a brunette flashing a flirtatious smile in his direction. He took in her perfectly applied makeup, the practiced come-hither smile, and obviously fake breasts and waited for a pang of appreciation to hit him, for his cock to take notice, or the heat of lust to simmer inside him. A minute later, as she nudged the blonde standing beside her and the two of them headed his way, he was still waiting. Ever since Carson and Dylan’s double wedding two months ago, the desire that had once come so easily for ready and willing women had taken a decisive step back, and it was starting to piss him off.

He downed the drink and set the empty flute on the buffet table, his gaze catching on the perfect heart-shaped ass of a sexier, curvier brunette. The Magnum in his pants twitched. That’s more like it.

“Is she beautiful, or what?” Dylan said.

He knew his brother was talking about Tiffany, a tall blond sports agent who was as fierce in business as she was in love with Dylan. But as Brett said, “A stunner,” there was only one woman on his mind. The feisty one who had starred in every goddamn fantasy he’d had since he’d met her and whose sassy retorts never failed to turn him on. The one leaning closer to her friend to sniff a bottle of perfume. Sophie Roberts, his brother Mick’s legal assistant, and the beautiful temptress who blew him off every chance she got—including at his brothers’ wedding, when she’d flipped some sort of switch inside him.

The other two women neared with hopeful seduction sparkling in their eyes, and Brett planned his escape. Dylan seemed oblivious to anyone other than Tiffany, so he clued him in. “Trouble at two o’clock.”

As Dylan headed for Tiffany, Brett set his sights on Sophie, who was being ogled by a blond dude with let’s fuck in his eyes. Brett rolled his shoulders back, sizing up the competition as he crossed the room. Competition my ass. The douche bag was definitely barking up the wrong tree. Then again, any man trying to hook up with Sophie in front of Brett was in for trouble. She may not be his, but he was bound and determined to change that. At least for one night. It was time to reset his interest meter, and he was pretty sure the only way to do that was to finally have Sophie Roberts.

Sophie bent at the waist to smell another fragrance, and Brett came up behind her, leaning in close enough to feel her softness against him, and said, “I’d know that fine ass anywhere.”

Without missing a beat, Sophie straightened her spine. Her electric-blue eyes slid down his frame, alighting every greedy ion inside him. A confident smile lifted her full lips as she met his gaze and said, “I thought I smelled cocky ex-cop.”

As an international security expert, Brett knew how to read people, and no matter how many times Sophie turned him down, the desire in her eyes gave away what she really wanted.

“What was that? You want to smell my cock?” He paused long enough to notice, and appreciate, the effect he had on her. Her nipples strained against her curve-hugging gray dress. Stepping closer, he took in the flecks of silver in her eyes and the slight hitch in her breathing. He’d propositioned her more times than he cared to admit, and he loved each reaction more than the last. “Smelling isn’t really my thing, but if you want to get up close and personal, I can be persuaded.”

“Hey,” her friend said with a scowl.

Sophie touched the brunette’s arm, never taking her eyes off Brett. “It’s okay, Grace. You know how some guys buy cars to make up for their”—she lowered her gaze to his groin, stoking the fire inside him, and arched a brow before meeting his stare again—“deficits? Brett is a master at it. Grace Montgomery, meet Brett Bad, Mick’s youngest brother.”

“And his biggest,” Brett added with a smirk.

Now it was Grace’s turn to size him up, and she did so with a jut of her hip, a crossing of her arms, and a long, slow leer from his head to his toes, which had zero effect on him, other than amusement.

“This is Brett? The one who wants to install monkey bars in the conference room for his after-hour fantasies?” Grace reached out and lifted his chin with her index finger, making a dramatic show of assessing his features.

He got a kick out of her brazenness, but an even bigger high knowing that Sophie had talked about him.

“He’s definitely hot, Soph,” Grace said. “You sure he’s packing a minibike in there and not a Harley?”

Brett chuckled. Holding Sophie’s gaze, he said, “How about we ditch this place, have a few drinks, and maybe you can find out?”

“I’m not sure that’s a good idea,” Sophie said.

It wasn’t a no, which was more than he usually got out of her. “Since when has that stopped me from anything?”

“Probably never.” Sophie lifted her chin with a sassy smile.

“And this is a very good idea,” he assured her. Sophie was good friends with his brothers’ wives, and because of that she was often included in their outings, which meant she and Brett were together a lot. But not alone. He’d give anything to get her alone, and getting her to go for drinks with him and her friend was one step closer. “We even have a chaperone, right, Grace?”

“You are good, aren’t you?” Grace looked at Sophie. “Actually, I could use a little fun. I’ve been working like mad.”

Sophie shifted her weight from one high heel to the other. “It’s getting late.”

“We’ll only have a few drinks, not stay out all night.” That is, unless you want to.

“I’m game,” Grace said. “If for no other reason than so I can be entertained by Brett tossing out his fishing line. It’s my only night off in weeks, and I’m the one who has to work in the morning.”

Sophie bit nervously at her lip.

“Come on,” Grace coaxed. “Stop being such a Girl Scout. Besides, what do you have waiting at home? The next Kurt Remington novel?”

Kurt Remington wrote thrillers, and Brett knew the author well. When Kurt was in town, he and his siblings hung out at NightCaps, the bar Dylan owned. But this new information about Sophie surprised him. He’d always pictured her reading romance novels and watching the Hallmark Channel, dreaming of finding Mr. White Picket Fence, which, according to Mick, was why she wouldn’t give Brett the time of day.

“You read thrillers?” he asked, in case Grace had been kidding.

“Read them?” Grace laughed. “She’s devoured them since we were kids. That’s about all she does in her free time. That and dreaming about Kurt Remington, the very hot, very married, author.”

“Grace!” Sophie tried to suppress her smile. “That’s not all I do, and I don’t dream about him. I just like his writing and the way his mind works.”

“Well, Sexy Sophie, you’ve clearly got the wrong man starring in your fantasies. If thrills are what you’re into, you’re looking at the king of them.”

Sophie laughed. “You never give up, do you?”

Her expression softened, and her gorgeous blue eyes moved between him and Grace. She exhaled loudly and said, “Fine. But I’m not sleeping with you.”

“You keep telling yourself that, sweetheart.”